Standing tall on a dynamic history of more than five decades, Central Institute of Fisheries Education (Deemed University) can justifiably be called the national leader in fisheries education in India. The institute has been committed to the development of qualified and trained manpower to plan, execute and manage various fisheries developmental programmes in the country.

Brief History & Development of the Institute

As an Academic Institute under Government of India:

The Central Institute of Fisheries Education (CIFE) was established by the Government of India, with the assistance of FAO/UNDP on 6th June 1961. The main purpose of its establishment was to impart post-graduate education and training largely to the inservice fisheries personnel of the country to support fisheries developmental activities. The CIFE started functioning at the Institute of Science Building in Bombay (Mumbai, now) and initially the academic activities were organized in three divisions viz. Fishery Biology, Fishery Technology and Fishery Economics for conducting a two-year postgraduate course of Diploma in Fisheries Science (D.F.Sc.). The Institute was shifted to a rented building at Masjid Bunder, Bombay in 1964. The Food and Agricultural Organization (FAO) of the United Nations, at this stage, actively collaborated with the Govt. of India and helped in strengthening infrastructural facilities at CIFE by providing sophisticated equipments together with expertise of high standard. The fishing vessel, MFV Harpodon received under FAO/UNDP assistance in 1968 provided basic facilities for on-board training in the areas such as marine fishing, fishery biology and oceanography. The Institute headquarters moved to its own building at Versova in March 1967 and acquired its first centre, the Inland Fisheries Training Centre, Barrackpore in West Bengal from Central Inland Fisheries Research Institute (CIFRI) in October 1967. The Institute also took control of the erstwhile Fisheries Extension Centres of the Govt. of India and organized them as sub-centres for Inland Fisheries Operatives Training at Agra and Hyderabad. These centres were subsequently shifted to Chinhat near Lucknow (UP) and Kakinada (AP).

The infrastructural needs in terms of aqua farms were greatly fulfilled by the transfer of Brackishwater Fish Farm at Kakinada in September 1968 and the Freshwater Fish Farm at Balabhadrapuram in 1973 from the Govt. of Andhra Pradesh. In 1967, the University of Bombay accorded recognition to CIFE as a study centre for M.Sc. and Ph.D. programmes by research in the fields of Applied Zoology and Biochemistry. Several other institutions such as IIT, Mumbai, IIT, Kharagpur and Mangalore University also recognized CIFE as a study centre for Ph.D. programmes.

Under Administrative Control of ICAR: 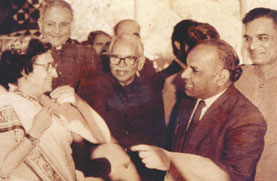 The administrative control of institute was taken over by the Indian Council of Agricultural Research on 1st April 1979. With this, the charter of CIFE was enlarged to cover research and extension activities besides its academic programmes. From a set-up of three divisions initially, the Institute added four more divisions during the VI Five Year plan period. The Institute acquired a 36.87 meter training-cum-research vessel (MFV Saraswati) with the NORAD Aid in December 1982, to strengthen its onboard programmes in marine fisheries and oceanography. During this period, the training facility in freshwater aquaculture also received a boost with the acquisition of a 100 acre fish farm at Powerkheda from the Govt. of Madhya Pradesh in 1983. Also, the Chinhat Training Centre at Lucknow was taken over from the Government of Uttar Pradesh for shifting the Inland Fisheries Operatives Training Centre from Agra.

During 1984, the M.Sc. course in Fisheries Management was started with affiliation to the University of Bombay. Dissertation component was introduced as an essential requirement of the D.F.Sc. and the Certificate courses. In 1985, a resolution was made by the ICAR and the Ministry of Agriculture to raise CIFE to the status of a Deemed-to-be- University. An Operational Research Project (ORP) for the ground saline water aquaculture was started at Sultanpur in Haryana. Three more divisions were added to then existing seven, during the VII Five Year Plan period. Consequently, with these enlarged charter of activities, the staff strength of CIFE rose from a mere 19 in 1961 to 398 in 1985. 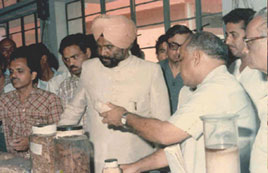 The Deemed University status conferred on it in 1989 came as a fitting tribute to its pioneering role in human resource development for fisheries sector. CIFE, thus, has the distinction of becoming the first Fisheries University in India. With this, the M.Sc. and Ph.D. programmes, hitherto being conducted under affiliation to the University of Bombay, were brought under the academic purview of CIFE. The M.Sc. academic programmes were recast as M.F.Sc. (Master of Fisheries Science) during the year 1995 and were offered in three specializations, viz., Fisheries Resources Management (FRM), Inland Aquaculture (IAC) and Mariculture. Ph.D. programmes were also offered in these specializations. During the same year, the M.F.Sc. and Ph.D.courses in Mariculture, offered till then under affiliation to the Cochin University of Science and Technology, were brought under the CIFE banner.

Following the recommendations of the Quinquennial Review Team of 1995, the one-year Postgraduate Certificate Courses in Fisheries Extension and Inland Fisheries Operatives Management conducted at the Kakinada and Chinhat centres respectively, were wound up from the academic year 1995-96. The Institute set an exemplary trend in collaborative academic endeavours by starting two new Master of Fisheries Science (M.F.Sc.) programmes in Freshwater Aquaculture and Post-harvest Technology at CIFA, Bhubaneswar and CIFT, Kochi respectively under the CIFE banner.

Grant of Accreditation to CIFE, Mumbai:

As a part of new initiatives taken by Indian Council of Agricultural Research to ensure quality in higher education by the process of accreditation of agricultural education system, CIFE has initiated institutional accreditation process in 2001. The information and data on various aspects of CIFE was collected from different task forces constituted for the purpose. The collected information along with the data of available documents was processed and edited to bring out a self-study report consisting of 12 chapters encompassing 12 annexure, 31 tables and 27 figures running into 218 pages. The self-study report was submitted to the Accreditation Board, ICAR, New Delhi on 19th November 2001.

CIFE has been awarded ISO 9001:2008 certification by Basic Certifications (BSCIC) based on the assessment conducted during March 2013 and operation of Quality Management System at CIFE, Mumbai which complies with the requirements of ISO 9001:2008 to develop Qualified Human Resources in the Specialized Field of Fisheries. The quality policy drives the Institution for a continual improvement and also communicates the intension of management to meet the requirements of students. This process allows for improvement of the internal communication by regular management review meetings and setting quality objectives. The ISO standard allows the system to be regularly audited internally by trained auditors so as to keep it updated. Subsequently, the system of document and record control will improve the traceability and retrieval of records. The implementation of ISO 9001:2008 system would help in identifying the products and process which are not conforming to the requirements and to take suitable corrective and preventive actions.